What is Support and Resistance in Forex 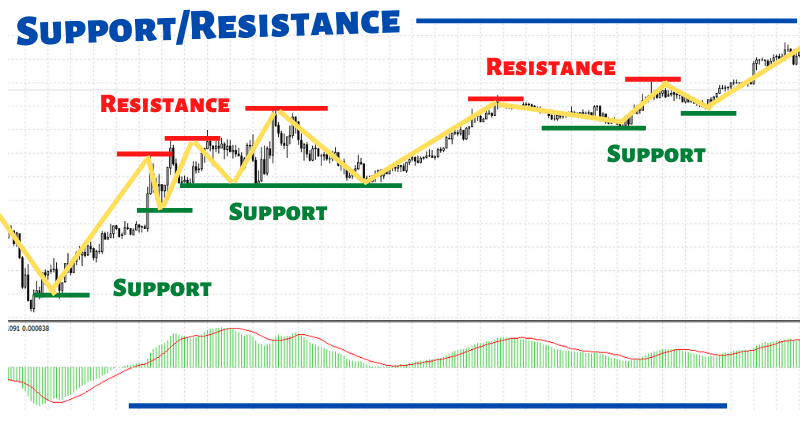 The concepts of support and resistance represent the backbone of technical analysis. They are undoubtedly the two most highly discussed topics of technical analysis, and every serious trader should know how to identify and use them properly. The terms refer to price levels on charts that tend to act as barriers, preventing the price of an asset from getting pushed in a certain direction beyond a certain point. Learn in this article how to use this strategy in Forex trading.

There are many different ways to determine the Support and Resistance level, such as using recent price action, Pivot Point formula, and Fibonacci lines. This article is going to focus on price action.

In its simplified form, horizontal support and resistance looks something like this: 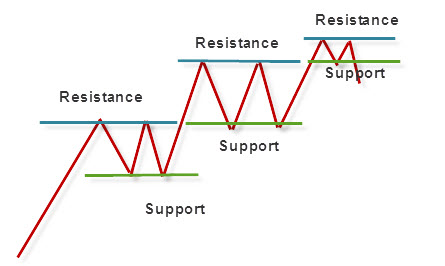 While the markets sometimes form patterns similar to the one above, it should be understood that the markets are always dynamic and volatile; they appear different for each new day and each new timeframe, and thus identifying (let alone profiting from) these support and resistance levels is neither exact nor easy.

The Greek philosopher of change, Heraclitus, once said that “you cannot step into the same river twice,” and the markets are an excellent example of this, seeming to put everything in hyper motion, even hyper-time as they collapse a speculative future into the present price. Markets shift, ebb, and flow, forming zigzag waves, and if we look hard enough we can see some structure when resistance and support form to contain the motion, but in time they too will erode, disintegrate and prove invalid.

This article will seek to help the reader identify and draw these support and resistance levels as they form or shortly afterward, so you can take advantage of them before they become irrelevant.

What is support, how is it plotted, and how can one profit from it?

Support is named support because it is the line traders expect to support the price, and the line traders won’t let the price fall below. It is the price level at which buying pressure is so strong that it acts as a floor, preventing the price of an asset from being pushed downward.

Support can be drawn using the horizontal line object tool in MT4, and you can insert this horizontal line along the lows of the trading range, the closes of lower bars, or a combination of the two (wherever it seems the market has touched down and bounced up again). Make sure your horizontal line touches these lows and closes more than once. The more retouches (called retests) of these lows, the stronger the support is said to be.

Example of GBPUSD on H4 timeframe:

The above chart shows how multiple retests of the lows can act as support. In the first channel, the market had touched the 1.6105 level on four separate occasions, each time confirming the strength of the support until finally, it had to break beyond the relatively weaker resistance that had formed on only two touches. The second channel seems to be a déjà vu of the first.

The market retouched the 1.6285 support level on five separate occasions, each time confirming the power of the support. So far, the resistance was touched only twice, and it looks as if the market is heading back up to touch it again, if not break through.

You have to make sure to draw a horizontal line from the former resistance level across to the blank area underneath the current price action. If the price then bounces from this level, you have a confirmation that that is indeed a strong support level.

In the above chart of the USDCHF, there was a key resistance level (0.9130) that was breached on March 25 2011, which signaled to traders to become bullish on that pair for the next two weeks. That former resistance area was turned into support, the level at which sellers felt reluctant to trade further down and at which buyers saw as the best opportunity to trade up.

That new support level was retested on March 31 2011, with a big bounce upwards, providing confirmation that that level was indeed strong support. Thus, it was little surprise that when price again fell to that 0.9130 support again on April 06 2011, it again bounced back.

Strategy #1: Buy on Bounces of Support

The logic behind support is that as price declines towards support and gets cheaper, buyers become more inclined to buy and sellers become less inclined to sell. If the larger trend is currently bullish, then a sound strategy is to take up buy limit positions along support levels, to take advantage of the better price and the swift bounce up, if the support is strong enough.

Bear in mind that support does not always hold, and a break below support signals that the bears have won out over the bulls. Support breaks and new lows signal that sellers have reduced their expectations and are willing to sell at even lower prices.

Strategy #2: Sell on Breakdowns of Support

A second strategy is thus to be prepared for a breakdown through support. You will be a seller looking for a breakdown through support, perhaps at the line itself, but even better at a confirmation point x number of pips below support. Once support is broken, another support will have to be established at a lower level, perhaps at a former resistance. Also, once support is broken, it becomes new resistance, providing back up for your short trades.

What is resistance, how is it plotted, and how can one profit from it?

Resistance can be drawn using the horizontal line object tool in MT4, and you can insert this horizontal line along the highs of the trading range, or the closes of higher bars, or a combination of the two, wherever it seems that the market had hit a ceiling and bounced back down again. Make sure your horizontal touches these highs more than once. The more retouches (called retests) of these highs, the stronger is the resistance is said to be.

Example of EURUSD on H4:

The above chart illustrates a very powerful level of resistance that first formed on March 22 2011 at 1.4250, which was the swing high of that week, and then a week later (the first week of April), traders had tried to repeatedly retest that level, slamming their heads again and again into that ceiling. At one point it looked like six or so H4 bars ended up with their highs near that level.

It eventually fell back to the 1.4155 support confirmed in the last week of March, and when it held firm, it was the signal for traders to make another stab at resistance. The market bounced upwards from support with enough force to finally break the stubborn resistance of 1.4250 on April 06 2011, going on to see a new 15 month high of 1.4350 within that day.

Interestingly, the traders took an opportunity to retest the former resistance, now support, of 1.4250 on April 07 2011, and the bounce from it is currently driving the market back up.

Example of USDJPY on H4 chart:

The above chart is another example of resistance stubbornly holding and then breaking. The first resistance line was determined at 83.15 on March 30, and it held together for a number of unsuccessful attacks, but then on March 31, it finally broke, allowing it to go 150 pips higher.

The second resistance line was determined at 84.45 and it held together for two more days, resisting a number of attacks until finally it broke on April 05, allowing it to go 100 pips higher to 85.50. Again there were repeated attempts to take out 85.50, but finally it held firm, and the market reached a new support level at 84.90.

Strategy #1: Sell on Bounces of Resistance

The logic behind resistance is that as price moves up towards resistance, sellers become more inclined to buy and buyers become less inclined to buy. If the larger trend is bearish, then a sound strategy would be to take up short limit orders at or near the resistance lines, being prepared to exit at the confirmation of their break.

Strategy #2: Buy on Breakouts of Resistance

You can see from the above charts resistance does not always hold and break above resistance signals that the bulls have won out over the bears. Thus, a second strategy that becomes profitable is to put in buy stops at a breakout, perhaps x pips beyond the resistance level in order to confirm it as a valid break. If the resistance breaks, new highs signal that buyers have increased their expectations and are willing to buy at even higher prices.

If the larger trend is up, as in the case of the USD/JPY and EUR/USD charts above, you should be prepared to become a breakout buyer. The trend is your friend, and a zoom out to the daily picture can give you an idea of the trend direction. 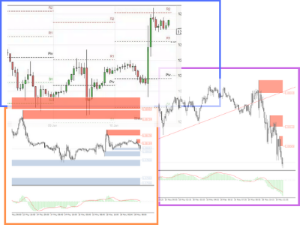